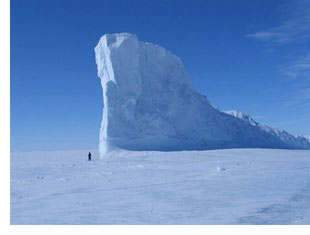 “No scared?” asks my Inuit guide, Sam. Truth is, I was terrified. We’d just climbed a 5,000-foot-high, snow-covered mountain peak on Nunavut’s Bylot Island, our snowmobile just barely making it to the zenith. Perched at the top and about to begin a frightening, 75-degree vertical descent , I was silently praying we’d make it down alive.

I squeezed my eyes shut as Sam freewheeled down the slope, and in minutes, we were back on the frozen ice of Pond Inlet, with the magnificence of Canada’s Arctic stretching endlessly before us.

It was my idea to head north to Pond Inlet, a small Inuit community in northern Baffin Island. The literature promised polar bears, narwhals, beluga whales and seal watching, so I booked my flights, only later poring over the Nunavut map to find the tiny speck of the massive Arctic that constitutes Pond Inlet.

I knew we’d travel to the edge of the ice. But I wasn’t prepared for the pristine yet desolate beauty of the Canadian Arctic, for the haunting whistling of seals swimming far below the surface and the strength, courage and determination of those who choose this place as home. 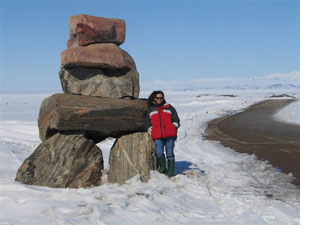 It was evening in the town of Pond Inlet when our flight landed, and though a heavy fog obscured the view, night could not have been further away. By late May, Nunavut has surrendered to 24-hour days, confusing the mind and body with sunshine even at 11pm.

The sun shone brightly the next morning as we followed our guide, Dave Reid, owner of Polar Sea Adventures, to “the beach,” our point of departure. Despite the presence of upturned boats on the shore, it was hard to imagine this stretch of ice as a beach. Husky sled dogs sat nonchalantly on the ice alongside their komatiks, or sleds, and with no sound of waves, no trace of sand and no visible water, it’s easy to believe this is, indeed, land.

Peer down a crack, however, and you can’t help but notice that it’s ice frozen five feet deep. We clambered aboard the komatik that would transport us behind a roaring snowmobile for the two-hour journey to Bylot Island, along with camping gear, food and a very long rifle – just in case we encountered an aggressive polar bear.

Our first stop, just four kilometers from the shore, was an iceberg, arrested in its path last fall and frozen in place until the ice melts in July. The residents of Pond Inlet have the benefit of continually changing scenery, as new icebergs arrive from nearby Greenland each year, while others continue their journey en route to Newfoundland.

We hiked onto the massive girth of this centuries-old iceberg, marveling at its 100-foot height, and even more at the knowledge that most of its magnitude was hidden well below the surface. And we knocked off a small block, saving it for our tea and coffee break. “There’s nothing like the taste of water derived from a 10,000-year-old iceberg,” said Reid. 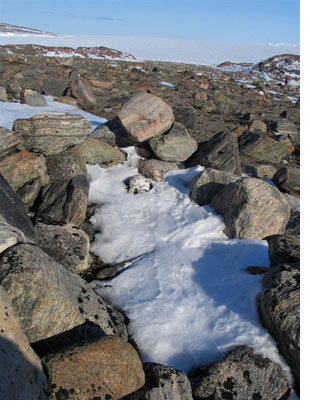 “This is a harsh land,” cautions Parks Canada in its literature to visitors of Sirmilik National Park. “Rescue facilities and services are very limited…and may make rescue entirely impossible. You must be prepared for self-rescue.”

We’d come equipped, Reid informed us. For the past seven years, he’s made a living by taking visitors onto the ice floe in May and June, and escorting them by kayak through the inlet in July and August.

He carries the essential satellite telephone, a two-way radio, the ever-present rifle and plenty of food and warm clothing. Most importantly, he relies on the companionship of an Inuit elder, Sam. The Inuit know this land better than anyone else, and it was Sam who advised us where the ice was sufficiently solid to travel, keeping a watchful eye out for bears.

From a distance, we saw seals lying like large slugs on the ice surface, nearby the holes they’d ingeniously created. At the first sound of the snow machines, however, they lumbered back into the icy water. Perhaps time has taught them that machines like ours can be their demise. Many Inuit hunters rely on their seal catch to stave off hunger, waiting for hours and days at their small cabins to hunt.

Though they know this land so well, even they can make potentially fatal mistakes while traversing its surface. In the comfort of our communal dining tent at night, we heard stories of Inuit who, caught on the ice for weeks in bad weather, were forced to eat their team of Huskies to survive. Inuit elders still recall family and friends who died of starvation, some found frozen to death in their makeshift homes.

The message is clear: the weather has no mercy out here, and your resources are all you have. The isolation is at once magnificent and fearsome.

We saw this with sheer clarity when we stopped briefly in Sirmilik National Park to inspect the remains of an old whaling station. All that remains of this once active slaughter house is a rusty barrel and the bones of an unfortunate, long-dead mammal.

Nearby, circles of stones designate the places where a Thule community resided long ago, and the shallow grave of one of its residents lies undisturbed, a skull and femur glinting in the afternoon sunshine.

Nunavut leaves you with a sense of your smallness in the world, and the power of the natural forces around you. Travel here requires a sense of adventure and a willingness to push the limits of your experience. But it’s richly rewarded, for the Canadian Arctic is one of the last pristine frontiers, a place literally on top of the world, and one so vast and silent, you can hear the murmur of your very soul.

Photos by Lauren Kramer:
1: Standing by a huge iceberg near Pond Inlet.
2: Inukshuk at Pond Inlet.
3: A shallow grave at Sirmilik..