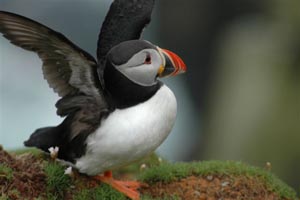 I sit on the stone wall that protects Burrastow House from the sea, looking out over Vaila Sound. The beautiful twilight Shetland sky of the Summer Dim is blood red, and reflects off the shimmering ocean waters. “Back home we have a saying, red sky at night, a sailor’s delight,” I say to a young islander who has stopped for a chat.

“Aye,” says she. “Here it is a little different – We say ‘Red sky at night, hopefully the Orkney’s are burning.'” Such is the rivalry that exists between the two remote island archipelagos that lie adrift off the north coast of Scotland in the North Atlantic. Still, they are of a singular mind when you call either Scottish. “Nae,” They are Shetlanders or Orcadians, that is unless Scotland is beating up on England in a football match, then Scottish they become. Whatever their allegiance, the Shetland Islands are a wild and wonderful escape, remote and mysterious, full of history and nature. The country is uncluttered by houses and trees. At first one misses the forest, but soon the stark barrenness of the landscape exerts its fascination. Roads curl through the valleys and follow the rugged shores, past rock homes, stone walls, and neat paddocks. Man made things only serve to emphasize the vastness and pristine wildness of the land. 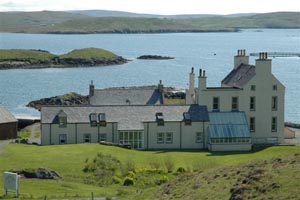 From Burrastow House, my guest home on the West Mainland, I set off on a sheep track that winds its way over the moor and along the ragged coastal cliff-tops. It is sheer beauty, and peaceful, a silence broken only by the stirring of wind, the crash of waves and the cry of the kittiwakes. After dining at my seaside accommodation on lobster caught in the Sound and served up fresh by Belgian Chef Pierre, I wanted the exercise of a short walk along the rugged, rocky shoreline. Each new bay and craggy outcrop draws me onward, however, and the late summer light has me walking well into the night. The trek is as much a part of the senses as it is visual. From this barren land one never ceases to pluck strangely rewarding experiences. It sharpens the senses; eyesight, sounds, and the smells of the moors. Peat bog and mist, the smell of the sea and decay, the sounds of the water flowing down the hillsides, rain, wind, and the distant bleating of sheep. Spring quill covers the rocky knolls, and Thrift grows like lichen on the black rock, colouring it pink. Marsh Marigold grows in the moist soils – yellow flowers following the damp draws. Purplish-black Heath Spotted orchids grow in the boggy areas. Floating in the white peat water are the white heads of water lilies. The grass, short and tough, is of a greyish-green colour, almost a dull blue in certain heights, interspersed with clumps of heather. I had travelled to the Shetlands the night before aboard a Northlink Ferry from Aberdeen. I was out of my berth and up on deck in the early hours. I suppose I wanted to shout “Land Ho!” but the fog was as thick as the proverbial pea soup. So we were almost on top of the landing dock in Lerwick before there was any indication that the Shetland Islands did indeed exist out here in the North Atlantic. Lerwick is Shetland’s capital, a busy port that once provided shelter for Viking fleets, and now harbours glamorous yachts, cruise liners and fishing boats. At the heart of the town is the picturesque Market Cross and Commercial Street, a stone-flagged, winding, narrow lane flanked by tall granite buildings. Here I find the Tourism Centre, and the helpful staff sets me up for my island stay. 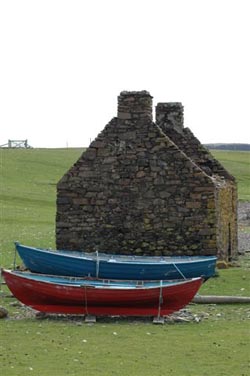 Six miles to the west of Lerwick is the ancient capital Scalloway, a pretty village with pastel coloured buildings. Scalloway Castle looks down on the harbour, and the Scalloway museum tells of the “Shetland Bus” operation in the Second World War, where the town became a secret base for Norwegian resistance. After breakfast, I drive 40 kilometres south along the coast road, past Shetland ponies, sheep, and old stone croft houses, following a narrow peninsula to the Sumburgh Head Nature Reserve. Here I see Puffins, Gannets, Guillemots and Kittiwakes that roost on the sheer cliffs which rise from the Atlantic in steep-sided splendour. Out to sea I see whales breeching, and in the bays and inlets otters and Grey seals frolic. On my return journey north, I stop to witness Shetland’s long and colourful history and its archeological wonders which date back to Neolithic times, when the first island settlers arrived in fragile wooden boats over 6,000 years ago. The village of Jarlshof near the Sumburgh Hotel, spans 3,000 years of continuous settlement, from Neolithic to Viking times, from the late Bronze Age through to the Middle Ages. It was only recently discovered, when a series of severe storms washed away the protective layer of sand and exposed the site in 1905. Over 6,800 sites of archeological interest can be found peppered all across Shetland; ancient houses, burial chambers, standing stones, brochs and early chapels. The Iron Age broch at Mousa stands impressively 13 metres high above the sea, the only complete broch in the world. 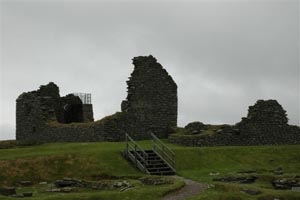 The 6th Century saw monks arrive from Ireland and West Scotland to spread new religion. The Norsemen arrived in 800 AD, the geographical location of the Islands was great as a stepping stone for North Atlantic voyages. In 1469, Christian 1 of Denmark, Norway and Sweden pledged Orkney and Shetland as a dowry for his daughter on her marriage to James III, and the Shetlands became part of Scotland. Just don’t tell them that.

The Shetland Islands lie almost exactly at the centre of a triangle with Bergen, Norway, approximately 320 kilometres to the east, Faroe slightly closer to the north-west and Aberdeen at a similar distance to the south. Getting There There is a commercial airport at Sumburgh on the South Mainland, with several flights daily from Aberdeen, Edinburgh and Glasgow. www.flyshetland.com Travel by sea is easy and allows you to take a car. I took a NorthLink cruise style ferry from Aberdeen to Lerwick, booking a nice berth for the overnight voyage. www.northlinkferries.co.uk