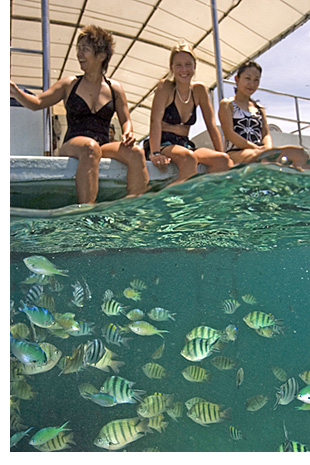 I’m standing at the edge of a pontoon, gazing down at the greedy waters of the South China Sea off the shores of Sabah, Borneo, and I’m scared witless. In fact, “witless” is what I must have been to sign on for this escapade in the first place, seeing as I’m terrified of water and can’t swim a stroke.

“Don’t worry,” says my guide Eric as he steers me onto a steel ladder, “You’ll be fine.” I have a sinking feeling, both literally and figuratively speaking, as I prepare to descend to a depth of ten metres to the floor of the ocean, but it’s too late to change my mind now.

Earlier on at the Sea Trek Centre on Pulau Sapi Island in the Tunku Abdul Rahman Marine Park, I’d been intrigued at the idea of strolling along the seabed despite being a non-swimmer.

The instructions on the fifteen-minute introductory video clip seemed simple enough, and I was reassured by the fact that three expert guides would be down there to come to the rescue if I signalled for help.

Also, I rather liked the idea of being video-taped underwater by the Sea Trek Centre cameraman, and showing off how intrepid I was to friends and family when I got home to Canada.

However, now that the moment of truth is upon me, my knees feel like rubber, and I cling white-knuckled to the ladder railings. I grope with my foot for the next rung, wondering whether my legs are long enough, and a hand grasps my ankle and gently guides me down. 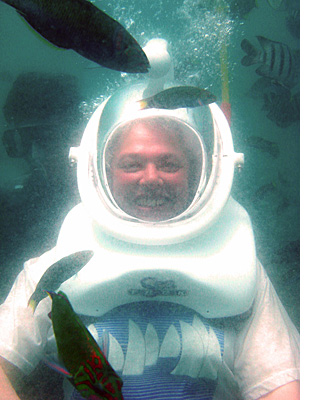 The waters lap chest high, and one of the pontoon crew lowers a glass helmet over my head. Its rubber pads sit heavily on my shoulders, and an umbilical-like hose which is attached to an air pump on deck, lets me breathe normally.

As I dip below the surface of the water, fingers still desperately clutching the ladder, I’m engulfed in a murky green world, waves rippling and surging around me. A shadowy figure by my side, guides me down, down… He taps my arm and gestures, ‘slow, slow’.

I stare into the opaque waters, trying to remember instructions. “Hold your head straight, and try not to look down!” My feet touch the bottom of the ocean, and my companion, prises my fingers off the ladder.

I stand with my feet apart, (as demonstrated in the instruction video), but have lost all sense of direction. Panic! A second later, a hand at my elbow leads me to a rope, and gestures at me to hold it, and move sideways, crablike.

Moving slowly gripping the rope, my feet scrabbling over the rock-strewn ocean floor, I am suddenly buoyant – exultantly light and fearless, surrounded by spiky orange and speckled blue coral and undulating seaweed.

Brightly coloured fish flit past my glass visor, nibble on my fingers and elude my grasp when I reach out to touch them. They are magical creatures these butterflies of the sea, as they dart purple, yellow, scarlet, maroon and blue. Some are large oval iridescent baubles of green and gold; others are flecks of silver paper. They shoal about me, beautiful in their careless prodigality.

I exchange delighted smiles with my neighbour who peers at me through her fishbowl helmet and points to a clown anemone fish that “kisses” her outstretched fingers and then shoots away in a shiver of bright orange and black. 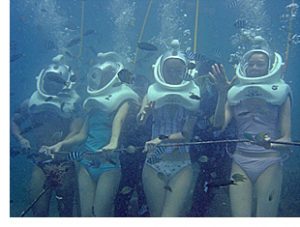 Further along a host of rainbow-hued parrotfish shimmer past, followed a little later by a narrow brown leaf-like creature, which lazily floats out of the murky waters, regards us without curiosity and glides off into the distance.

It is, as I find out later, an epaulette shark, which I might not have regarded with such equanimity had I known it then.

Time seems to be as fluid and slow as the waters that lap around me and as our 30-minute adventure draws to a close my underwater guide gestures towards the ladder that will take me back to the clamour of my world above the sea.

As I emerge, gravity anchors my feet to the ladder, and I have to work hard at heaving myself out of the water, eventually flopping like a beached whale onto the pontoon deck!

Eric beams, as we clamber on board the boat that will tender us back to Pulau Sapi. “What did you think of that? Wasn’t it amazing?” he says.

The answering burst of cheers, and clapping all but drowns out the growl of the launch’s outboard motor.

Getting There:
Sapi Island in the Tunku Abdul Rahman Park is a 40 minute boat ride from Kota Kinabalu, the capital city of Sabah, Borneo.