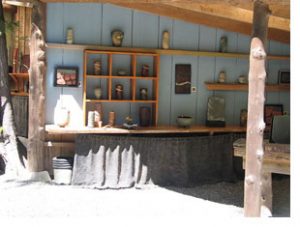 Just a puddle-jump away from the Lower Mainland, Galiano is magnificently undeveloped and pristine, its island charm unblemished by the tarnish of tourism.

Don’t come for the shopping – though you may enjoy browsing through the island’s handful of art galleries and gift stores. Rather, come for serenity, desolate beaches with nary a footprint and vistas that inspire honest, eloquent confessions of love.

We arrived on a summer evening, stopping for dinner at the Galiano Inn & Spa’s Atrevida Restaurant. Here, with no frowns at our casual attire, we dined on exquisitely prepared and presented beet-cured salmon with pomegranate reduction, and halibut cheeks on a warm cedar plank. Classical music played in the background as the nearby gulf islands disappeared into the dusk.

I was back at the inn the next day, this time for a love of blackberries. The Galiano Spa makes a habit of emphasizing the sensuousness of food – and not just in the kitchen. “Would you prefer a blueberry smoothie, a blackberry vino or a chocolate butter crème?” I’m asked when I arrive at the spa.

Bored with the typical array of spa choices, I’m thrilled to find that inn owner Connie Nordin and her spa team have spiced it up a notch by taking local, island delicacies and creating from them an innovative selection of body wraps and massage lotions using ingredients that add a sensuous, sumptuous and uniquely Galianan touch to the spa experience.

I chose the Blackberry Vinotherapy, a massage in which the sweet, sticky fruit whose thorns leave my skin shredded and blush-red each summer, are reincarnated into blackberry wine and slathered over my body by deft, soothing hands. The experience is aromatic, deeply relaxing and utterly sublime.

I needed it, especially after venturing to the island with a bicycle. Within minutes of clambering onto my mountain bike, I discovered that the downhills did not compensate for the brutal uphill climbs around every turn. Still, in-between the huffing and puffing, I noted that you definitely experience the landscape differently when you travel by bike. 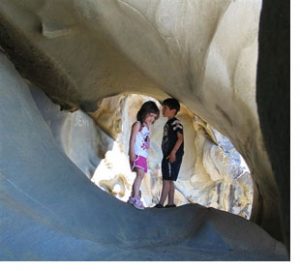 For one, the rustle of deer along the road was a pleasant surprise, as were the many hummingbirds that darted between the treetops. At an infinitely slower speed than vehicular travel, pedaling on a bike gives you more time to appreciate the island’s many vistas and its range of landscapes, from pastoral to ocean view.

But I was relieved to hop off the bike and explore the rest of Galiano by car. Journeying north, we stopped to explore Retreat Cove, where the elements and crashing waves have carved a cave from the smooth rock face.

We window-shopped in the pottery gallery of Sandra Dolf and marveled at the magnificent glass dishes created by Marcie deVicque, a talented island artist whose gallery was open but unmanned when we arrived.

It is clear, however, that trust is in the air at Galiano, and theft is virtually a non-issue. DeVicque’s gallery had a note to customers, instructing them that if they wanted to purchase an item, they could leave a cheque or use the credit card machine to process the amount. “I’ve returned home to some pretty sizable cheques,” one artist noted, adding that she had never experienced theft.

I saw it again at Galiano Boat & Moped Rentals, where Ralph Moyle, once a teacher in North Vancouver, rents out 15 mopeds and four boats to visitors. “Just leave the keys inside the moped when you return it, if I’m not here,” he said casually to couple on their way out the door of his rental hut.

He may not be worried about theft, but there are other concerns specific to island living that keep Moyle up at night since he became a full-time Galiano resident nine years ago. “A lot of island property is going to people with lots of money, who become absentee owners,” he said, pointing out a mansion as his boat puttered around Parker Island.

The population was 800-odd when he first purchased property on the island in 1978; now it sits at just over 1,000. “The people who want to live here year-round can’t afford to buy property anymore,” he says. With less than 50 kids in Galiano’s elementary school, Moyle worries that in future years, the island’s school and medical clinic may be forced to permanently close their doors.

There is some young blood on Galiano, though. Jesse Keefer is one example, an ex-professional cyclist from Vancouver who moved to the island in 2002 and purchased Bodega Ridge Lodge & Cabins. “I can be in Vancouver in an hour-and-a-half,” he says. “But I really love living here.” 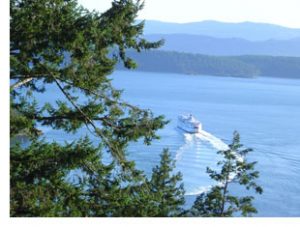 Part of it is the interesting cast of characters that constitute Galiano’s population. I caught a smattering of it on a quick visit. There’s Jane Rule, the well-known novelist whose work deals with gay and lesbianism, and Steve Ocsko, a Hungarian-born stone carver who lives and works up a steep hill on Manastee road, chiseling rocks into a veritable canvas of shapes and figures.

In the heat of the afternoon, we retire to a beach of crushed shells at Montague Harbour Provincial Park, lounging beneath the shade of orange-hued arbutus trees, whose trunks lean like Hawaiian palms towards the ocean. It is low tide on this long stretch of beach, and I can hear squeals of excitement as my children fill their buckets with translucent jellyfish and bright, purple starfish.

Above the distant cliffs, bald eagles are soaring in the thermals and the deep baritone of the BC Ferries horn pierces the stillness briefly before disappearing like a phantom into the gulf.

If You Go:
Galiano is a 55-minute ferry ride from Tsawwassen on BC Ferries (www.bcferries.com; 888-BCFERRY), and is also accessible via sea plane. For general island information, call the Galiano Island Chamber of Commerce at (866) 539-2233 or visit www.galianoisland.com.