As if in a time-warp we walked the ‘downtown’ streets lined with historic buildings in Fort MacLeod. Some date back to the late 1800’s; many are sandstone structures of the 1920 era.

Locals greeted us, a few stopping to chat; traffic moved at a snail’s pace. My husband, Rick, and I were swept back into the past while experiencing today’s unhurried life in this small south-western Alberta town. 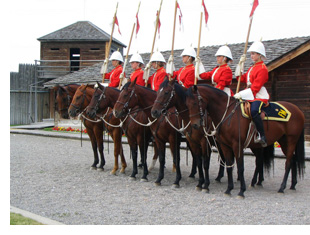 An arched walkway veered off Main Street, and led to The Fort Museum of the North West Mounted Police. Red-coated riders on sleek prancing steeds entered the grounds, their white pith helmets bobbing to the rhythm of “This land is your land, this land is my land….” My chest swelled with pride as we watched a musical ride performed by young equestrians, in replica uniforms of our Canadian icons.

The ‘Mounties’ trooped into this area in 1874 when Sir John A. MacDonald saw the need for law and order in the frontier.

Their newly constructed Fort and burgeoning town site was named after James F. MacLeod, their leader on the arduous trek west from Manitoba. MacLeod in turn was greatly aided by the legendary Métis guide and interpreter, Jerry Potts, who spoke many Native languages.

“After quashing the illegal whiskey trade that was destroying the lives of Blackfoot,” said Gordon, a local historian, “the NWMP had to deal with 4,000 men infiltrating the area to build the Canadian National Railway.”

King Edward VII bestowed the appellation “Royal” on the NWMP for their part in the Boer War. They later joined the Dominion force to become the Royal Canadian Mounted Police.

Gordon then led us to the filming locations of “Brokeback Mountain” – Academy Award “Best Movie” in 2005. Being movie buffs, Rick and I gleefully recognized the backdrop of many scenes.

The gleaming hardwood floors of the Empress Theatre creaked as we made our way down the isle. This grand lady first swung open her doors in 1912, and has since played host to a continual flow of live theatre, concerts and films.

Sinking down into the red velvet seats, we looked up at a giant neon tulip adorning the ceiling. The only additions since the last renovation by Dan Boyle in the 1940’s are large wall paintings of old movie classics, the work of Dan’s son, Neil.

“This theatre has been haunted for many years,” said Jamie, our guide. “Recently we had a medium tell us it is a ghostly “Ed” who is to blame for what happens in balcony seat “FF1”, also known as Ed’s seat.” Ushers surreptitiously watch patrons sitting in FF1, as they almost always squirm uncomfortably and end up moving over a seat or two. I do hope Ed enjoyed the evening’s side-splitting live performance of “Johnny Chinook” as much as we did (from our main-floor seats). 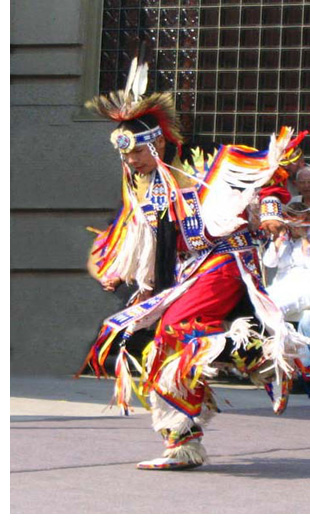 Head-Smashed-In Buffalo Jump is a short drive north and west of Fort MacLeod. We were greeted by resounding drum beats and the chanting of singers recounting 6,000 years of history. Nimble dancers dressed in beads, porcupine roaches and eagle feathers enacted ancient traditions to the delight of the audience.

The Interpretive Centre tells about the evolution of the Blackfoot culture. Our guide, Quinton Crowfoot, explained that the original name of their tribe was “Niitsapii” meaning “Keepers of the Prairies”.

The tribe’s method to lure the buffalo to a particular area was to burn the grass thereby promoting new lush growth. Europeans attributed the name Blackfoot because of their soot imbedded moccasins.

The Buffalo Jump itself is at the end of a path leading away from the Centre. As we stood near the edge of the cliff, I envisioned thundering hooves and clouds of dust as stampeding buffalo plunged to their death.

The ingenious strategy entailed mimicking a strayed calf or encroaching wolf and directing the buffalo into a funnel of stone cairns. Hunters, shouting and waving skins, then came from behind and drove the panicked herd over the then eighteen-metre precipice.

I’d initially thought the name “Head-Smashed-In” referred to a buffalo cranium, but its folklore origin is much more intriguing. The story goes that hundreds of years ago a young brave decided it would be awesome to watch the falling buffalo from under an overhang at the bottom of the cliff. The hunt was unusually good that day and regrettably the boy’s head was smashed in by the weight of the carcasses.

At the time of Europeans arrival, an estimated 60 million buffalo roamed the plains. With the aid of guns the species was nearly extinct by the late 1800’s. It meant the end of a way of life for the prairie tribes.

Like a time-capsule journey, our walk through the dramatic history of the early law enforcers, pioneers and Blackfoot was both enlightening and enriching.

In addition, the community’s friendly hospitality left us feeling warmer than the Chinook winds that turn the winter snows of Fort MacLeod into puddles.