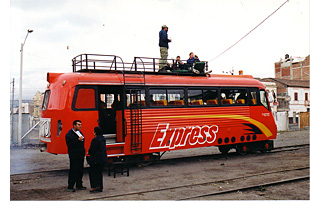 Expect the unexpected in Ecuador. One day began when I climbed onto the roof of a railcar at Riobamba and rattled through the mountains of the Andes. It ended 10 hours later after our minibus circumnavigated two road blocks on the main road to Guayaquil. We arrive at Riobamba’s local station in Ecuador’s Central Highlands at 6.45am. Our autoferro has three people on top already and another climbing the ladder up the side.

I join the four on the roof. Inside, are five jovial Italian women who go off on an adventure together each year; four Brits who have just returned from the Galapagos Islands; several Spanish-speakers from other parts of South America and a couple from Spain.

The roof has rails round the sides and we’re handed a cushion to sit on. As we wind up the hills, I realize my extremities are going stiff with cold — I can hardly hold my camera. We’re only about 200km south of the Equator, but we’re 3000m above sea level.

We twist in and out of the hills and through gorges. Some hillsides are patchworked in crops. We see an Indian in a scarlet poncho leading a dairy cow along a narrow hillside path. Another hoes a line of vegetables. These small holdings were part of a vast hacienda before the land reforms of the 1960s.

At ragged little Indian villages, the odd donkey is tethered to a fence and children watch the train go by. The village dogs chase the autoferro, barking furiously.

At Balbanera, we pass Ecuador’s oldest Christian church, built in 1534. Soon the track runs alongside a green valley with clusters of cattle. Eight years ago the Government piped the water down the valley and the Indians built an irrigation system — the Inca expertise with waterways is still there.

The autoferro stops at a little Indian village called Guamote. We’re still over 3000m high here, so the locals are in woollen ponchos or shawls with saucy little felt bowlers on their heads. Mothers carry their babies on their backs, wrapped in shawls, as they shop at the few food stalls on the street. At one, a whole pig has been roasted and slices are being sold to the locals.

Back in the autoferro, it’s warming up and we reach tussocky moorlands, the highest point of the track, at 3239m. I notice stretches of gray sand —volcanic ash from a massive eruption years ago.

Then we’re into pinus radiata trees, planted to try and attract rain, followed by a massive gorge where the hill opposite has been slashed by sulphur-mining. We pull into Alausi, a pleasant white-washed town, ready for the most dramatic part of the train trip — the stretch from here to Sibambe. 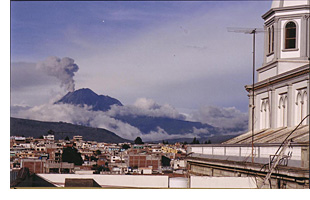 It includes the Devil’s Nose, a sheer serrated wall of rock. The track at this point is a series of sharp zig-zags carved into rock. I never did recognize the nose of the devil here, but it looks a fiendish place to build a railway.

The autoferro negotiates this zig-zag in a series of advances and reverses. We go through a few tunnels and cross one rickety-looking bridge. The rockface is relieved occasionally by rock plants or the odd cactus.

A worker gets off the train in a couple of places and oils the points (switches)! Once he clears some rocks from the track.

At the lowest point, the autoferro takes a breather and then starts the journey uphill and back to Alausi. The trip has taken four and a half hours. We continue the journey to Guayaquil by minibus.

When construction began (in 1899) on the railway which, before a multitude of landslips, joined Guayaquil to Quito, it was billed as the ‘most difficult railway in the world’. I believe it — the zig-zag track up the Devil’s Nose is certainly a masterpiece of railway engineering.

From Alausi we drive through sierra, cloud forest and the rainforest before approaching Guayaquil on a major road at about mid-afternoon.

Here the day turns to farce. We are stopped by an enormous road block made up of piles of gravel. The driver turns back, drives left, left and left again to emerge triumphantly back on the main road.

Short-lived triumph. Further along, we meet another road block. This time tires were burning on top of the gravel. All efforts, left and right, fail to find a way back to the highway.

Bystanders inform us that the road blocks have been organized by angry banana producers, fighting the Government for a better price for their product. Finally, we drive many kilometres back on the main road and turn onto another route through banana plantations and fields of sugar-cane.

We finally come to a bridge blocked by a row of rocks and manned by six men, two with machetes in their hands. Lively discussion and several US dollars oil the situation and we are on our way again.

Hours later than scheduled, I’m resting in my hotel in Guayaquil and re-calling one of the most unusual rail travel trips I have ever taken. Plus the relishing of the un-expected.

About the photos:
1: Setting off – on top of the train/bus through the Andes in Ecuador
2: Along the Pan American Highway – the Avenue of Volcanos.