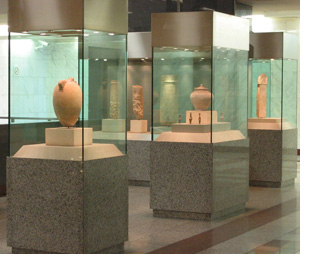 “That’s a subway station?” my friend asked incredulously as she flipped through the photos of my trip to Athens. The photos which triggered her curiosity were a series of glass display cases filled with ancient pottery and figurines. The cases were located in one of the Athens’ metro stations, recently built for the Olympics.

The building of the Athens metro unearthed a great deal of the old city, upon which modern Athens is built. Instead of moving everything into museums, the city decided to leave much of what was discovered where it was found – underground.

Many of the metro stations feature displays of ancient artifacts. The largest display is at the Syntagma Station. There are about ten display cases, including a wall sized display of a cross-section of the ground as it was excavated. Inside the cross-selection is a grave site complete with skeleton.

More than just clay vessels and grave sites were found however. During the digging of a ventilation shaft for Athens’ new metro the remains of an ancient Roman bath were found directly beneath one of the city’s main boulevards. The ventilation shaft was moved to another spot and the remains were excavated. Now pedestrians walk past the glass-enclosed remains, a reminder of their ancient past. 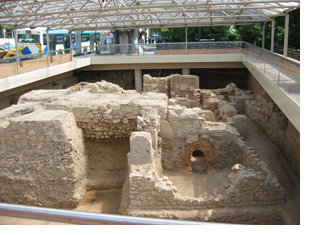 Had the Olympics not come to Athens, it is improbable that a metro would have been built, and the Roman bath would have remained buried. The Olympics brought the city a much improved infrastructure, and unearthed many remnants of the ancient past. Both local Athenians and tourists now have more to see in Athens, and can get around easier – thanks to the Olympics.

Among the metro stations with displays are the Syntagma, Acropolis, Panepistimio (Museum of the City of Athens) and Dafni stations on the Red line, and Evangelismos Station (National Gallery stop) on the Blue line.

Here’s what you can see along the new metro lines.

Metro Line 1, or the green line, links the National Archaeological Museum, the Keramikos Museum, and the Museums of Islamic Art and Traditional Pottery.

The National Archaeological Museum is the city’s largest museum, and features a treasure trove of classical artifacts. The extensive collection of Greek statuary is one of the museum’s highlights. The Keramikos Museum specializes in funerary art and artifacts.

One of the most unique museums in Athens is the Museum of Islamic Art. The museum covers thirteen centuries of art dating from pre-Islamic times and the birth of Islam through the Ottoman era.

Right nearby is the Museum of Traditional Pottery which features exhibits and documentary films on the art of Greek pottery. Every Saturday a traditional potter demonstrates the process of pottery making using the traditional foot-operated wheel.

The green line also links the neighborhood of Psiri (Athens’ happening night life area) to the port area of Piraeus (both one-day island cruises, and major cruise lines dock at Piraeus), as well as the Peace & Friendship Stadium and the Piraeus Stadium – both used for soccer and basketball games. 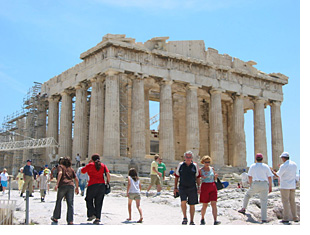 Metro Line 2, or the red line, links most of Athens’ major classical sites including the Temple of Olympic Zeus, the Acropolis, and the Theatre of Dionysos. Also along the red line are the National History Museum, which traces Greek history from the fall of Constantinople to World War II, and the Museum of the City of Athens.

The central station along the red line is Syntagma Square, the entrance to the shopping mecca of the Plaka neighborhood. Hidden amidst the numerous boutiques on Plaka’s narrow streets are several small Byzantine churches including St. Catherine’s, St. Nicodemu’s and St. Nichola’s.

Metro Line 3, or the blue line, is best used for transferring between the red and green lines, though it does stop near the Ancient Agora and the Byzantine and Christian Museum as well.

Due to be relocated to a more modernized location nearby, the Byzantine and Christian Museum features a large collection of icons, sculptures, miniatures, frescoes, ceramics, textiles and manuscripts.

The blue metro line also links the Athens airport to the city center. The journey takes a little over an hour but makes getting to and from the airport by public transport much easier.

The Metro wasn’t the only Olympic addition to Athens. A new tram way linking the city center with some of the coastal suburbs, and over 100 miles of new highway were also added.

The most important site along the tram is the Panathinaikon Stadium, the site of the first modern Olympic games.

The tram is especially helpful for visitors wanting to hit Athens’ stunning beaches. To get there you just need to hop on the tram line at Syntagma Square and get off at the Olympic Beach Volleyball Centre stop. The Volleyball Centre is closed, but right next door is one of Athens’ best beaches.

Another bonus provided by the Olympics was an overhaul of many of Athens’ museums, including the National Archaeology Museum which updated their displays and made many of them interactive. The Museum of Pottery also upgraded its exhibits.

In addition, hotels, from elite properties like the Intercontinental Athenaeum, Grande Bretagne and Titania, to lesser known hotels, all improved their facilities in order to entice Olympic visitors to choose their hotel.

About the photos:
1: Antiquities on display throughout the Syntagma Metro station.
2: Overview of the underground Roman bath
3: The most famous site in Athens is the Parthenon