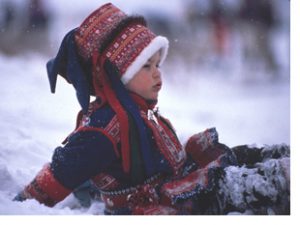 The Yuletide connection lured me to the Arctic Circle in December. In northern Finland, pure white snow is measured not in inches but in feet. It’s a place where reindeer herds thrive and Lapland traditional clothing is vibrantly elfish in color and style.

I found the possibility enticing. Unless you’re a scientist, you can’t get much closer to the North Pole. It wasn’t a tough decision, sign me up!

If you’re looking for an unconventional holiday and once-in-a-lifetime experiences, hop a plane for Helsinki. The Arctic Circle is a convenient one-hour flight north of Helsinki and there’s no need to bring bulky clothing—but more later.

Finland is a small nation of just over 5 million people and about 200,000 reindeer, give or take a Rudolf or two.

You can visit Finland anytime in early December as I did, to experience Yuletide traditions and still be home for the actual holiday. The city of Rovaniemi, Finland, lies at the Arctic Circle. It’s not as far-flung as you might imagine, having the northern-most McDonald’s restaurant in the world.

Prior to my departure I saw a segment on television about Finland. As it turns out, the President is a red-headed woman with a resemblance to TV personality Conan O’Brien. The American talk show host made quite a to-do about the likeness. O’Brien met with her and made all manner of jokes about it on national TV both here and there. Fortunately, the Finns have a sense of humor.

From Helsinki, Finnair will whisk you quickly to Rovaniemi, where the airport runways are lined by stately, snow-heavy pine trees. Stepping off the plane, I got an anticipatory chill, knowing I was so very close to crossing the Arctic Circle.

In Rovaniemi, the arctic is one big playground and snow a source of pleasure. Remote or not, standard tourist hotels and restaurants provide all the amenities we’ve come to expect.

My hotel, the Rantasipi Pohjanhovi, offered free computer access in the lobby. Finland is very progressive when it comes to the computer age. Modern tech made it possible to keep up with events back home.

Still wondering about the proper gear? Lapland Safari’s, a major tour company in Rovaniemi, provides all the warm clothing necessary for an arctic adventure. They realize most travelers either don’t own it or would rather not lug it so far. I was outfitted head to toe, by folks very familiar with combating cold temperatures.

All the gear remains in your hotel room to be used as needed, which is just about anytime you set foot outside the door! I loved my “loaner” wool hat and thick wool socks. The wool hat, when combined with the snowmobile suit hood kept my head toasty warm.

This tour company sits immediately next to the Rantasipi. Most of the activities mentioned here were arranged through Lapland Safari’s. 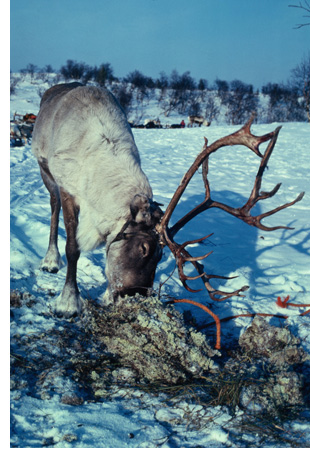 We visited a reindeer farm and rode like the jolly old man himself on a reindeer sled. Bumpy! As the sled had space for two, I was paired with a young man from Spain. He was enthralled with all the white stuff. Though our communication was limited, there was plenty of laughing and smiling. The sled ride did not involve flying over rooftops, I’m sad to report, we stayed attached to terra firma.

We had several hours set aside for Santa Claus Village, a white wonderland, constructed partially of snow buildings and ice sculptures. Tall ice obelisks glowed blue and green, illuminating the afternoon darkness. I kept noticing a group of youngsters in the 7 to 12 age range, wearing matching outfits.

They dashed around the village, in an organized fashion so I can only assume they were part of the staff, or perhaps staff off-spring. Their duties appeared to include sledding, playing in the snow, laughing and generally creating a festive feeling. It had the desired effect.

Snowmobiling is an important part of any visit to Rovaniemi. The trails are cut through more pristine, snow-covered pine trees. Acre upon acre of perfectly sculpted snow, without any imperfections is a pleasure to behold. The temperatures cause the snow to cling tenaciously to even the tiniest tree branch.

I took a spill off my snowmobile into the snow, head first. Between loud guffaws, I reminded myself I was sitting in a snow bank in the arctic. Talk about an out-of-this-world sensation! While riding, we could see the moon sitting on the horizon to our left and the sun on the horizon to the right. 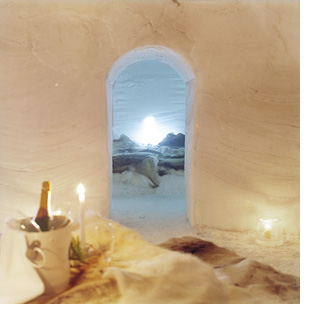 Every winter local residents build an igloo and other buildings collectively called Snowland. Like kids during the first significant snowfall, the men find the urge to build with snow and ice irresistible.

At Snowland I had a warm and tasty dinner in their igloo with steaming hot mushroom soup and a mild white fish as the main course. But even better than the food was the experience itself and the lifelong memories it gave me.

By April, Snowland melts away, to rise again the next December.

The Arctic Center and regional museum of Lapland, called Arktikum is a five-minute taxi ride from the hotel. How have indigenous people survived in this often harsh environment? What exactly is the line on the globe labeled the Arctic Circle? Arktikum explains it all.

While in Arktikum be sure to check out traditional Lapland clothing. It definitely resembles that of Santa’s elves with bold blues and bright red; even shoes with curled up toes.

Although we weren’t able to see the Northern Lights, due to cloud cover, they can be visible in December.

A journey to the arctic around Christmas time is no secret to travelers. I met people from Spain, Singapore, England and some happy honeymooners from Holland.