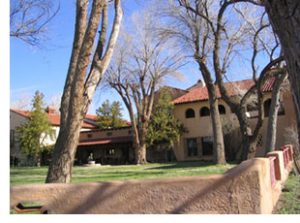 For the last few days, I have been following a trail blazed by Northern Arizona’s pioneers and settlers, and as my journey draws to a close, I hit a road that is more than just a small diversion into Arizona’s past. It is a portion of America’s fabled Route 66.

“The Route” has woven through America’s consciousness in books, in film and in song: it was the road traveled by hobos, hitch-hikers and drifters during the Dust Bowl years of the Great Depression and Beat Generation writer Jack Kerouac celebrated it in his best known work, On The Road.

Steinbeck called it “the mother road” in Grapes of Wrath, and folk musician, Woody Guthrie immortalized it in his ditty, Highway 66 Blues. Today’s slick Interstate highways although efficient, lack the nostalgia evoked by this legendary 2448 mile long “Main Street of America”.

Small wonder that, even living half a world away in India, Route 66 was the stuff of my teenage imagination, and now here it is…an unpretentious little stretch of road flanked by motels, strip malls and gas stations, as it runs through the downtown area of Winslow. But to me it is special.

It’s dusk, and I pull off onto the shoulder of the road, and capture a shot of the Route with the San Francisco Peaks of Flagstaff glimmering palely on the distant western horizon, and warble, “Get your kicks on Roohoot Sixty-Six…” as I get back behind the driving wheel.

A little later that evening, I am tempted to hum the lyrics of Johnny Mercer’s hit, “The Atchison, Topeka and the Santa Fe” a-la Judy Garland in the movie, The Harvey Girls. In the film, Judy was one of a select band of specially trained waitress, in one of the Harvey Houses, a chain established by Frank Harvey back in the 1930s. The Harvey Girls served hot meals to passengers at stations all along the Atchison, Topeka and Santa Fe route, and became icons of pop culture of those times.

La Posada, to my delight, is a relic of that bygone era. It is a historic Harvey House, originally designed by Mary Elizabeth Jane Coulter as a flamboyant Spanish hacienda–the kind that might well have been the residence of a Hispanic nobleman or a timber baron.

Today its main entrance is off Route 66, but its original front door once faced ATSF railroad station, affording disembarking passengers a view of a sprawling colonial style building, with arched arcades, flowering bushes and shady lawns.

La Posada opened just after the stock market crash of 1929, and endured for 27 years. But dwindling rail traffic led to its inevitable closure in 1959. The years rolled on and eventually the Burlington Northern Santa Fe Railroad announced plans to move out and demolish the building in 1994. 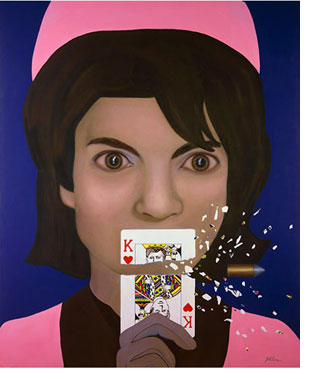 Enter Allan Affeldt, an art connoisseur and business entrepreneur who was determined to preserve La Posada as a tribute to the men and women whose dreams and toil shaped its history, its architecture and its memories. He acquired the property in 1997 with the intention of restoring it to its former magnificence.

As I make my way to my room, I notice that the doors along the corridor, carry the names of celebrities who have stayed at La Posada–Amelia Earhart, Howard Hughes and Shirley Temple, to mention a few. As for me?

I’m about to bed down with the ghost of a crusty U.S. Senator. I’m in Barry Goldwater’s suite, and a very fine room it is too, with its antique furniture and colourful Mexican wall hangings. I luxuriate in the Jacuzzi, after which I snuggle under the covers in Barry’s king-sized bed.

These consist of a series of portraits of former presidents and their consorts, and my curiosity is piqued by an odd little whimsy: each picture includes a different playing card, inserted into its composition.

Bill Clinton’s card is the seven of diamonds, and he appears as a rabbit being pulled out of a hat—a wry commentary on his magical ability to extricate himself from dubious situations! Hilary’s card rests in a fishbowl and she, too, is a seven of diamonds.

Jacqueline Kennedy wears the pink outfit she wore on that fateful day in Dallas, and holds in her gloved hand, the King of Hearts, i.e. Jack Kennedy, his card splintered by a speeding bullet.

The irises of Nancy Reagan’s eyes consist of tiny pictures of her husband, and it is romantically titled “Eyes Only For You”. Lyndon Johnson carries the four of spades on his Stetson hat, and Ulysses Grant flaunts the seven of clubs.

The artist is Affeldt’s wife, Tina Mion, and she smiles when I ask her about the portraits. It turns out that they are the result of a scheme whereby several artists decided to create a painting a week for a year.

As the evening shadows grow long across the lawns of La Posada on my last evening in Arizona, I sit on a wooden rocker on their verandah, Margarita in hand, and listen to the long whistle of a freight train as it clatters past.

There is no more nostalgic sound than this, and it evokes a lost world of leisurely travel, of prim young Harvey Girls with their black dresses and white aprons, of Model T-Fords, of John Wayne and Clark Gable.

And perhaps even a crusty old Senator.

Photos by Margaret Deefholts:
1: A close up view of the La Posada Hotel.
2: A small visitor strolls along the arched walkway.
3: Jaqueline Kennedy, one of the many paintings lining the walls. Note: “Jaqueline Kennedy: Stop Action Reaction” by Tina Mion. “Ladies First” collection-all artwork copyright of Tina Mion.
4: “Standin’ on the Corner” monument on a Winslow, Arizona street corner is homage to the Eagles’ song “Take it Easy.”

Arizona Outback Adventures, a company that prides itself on providing private and/or customized trips through Arizona, is based in Scottsdale. View their website at: www.aoa-adventures.com Or phone (toll free): 1-866-455-1601; e-mail: info@aoa-adventures.com

Best Time To Visit:
April to September
Northern and Central Arizona has temperate summers, and chilly winters with snow at higher elevations. Average maximum temperatures from April to September range from the high 70s to the low 80s which makes for comfortable sightseeing. Rainfall is minimal.

Places of Interest:
Even if you don’t choose to stay there, La Posada is well worth visiting for its collection of unusual objets d’art and paintings. If you are willing to pay a premium for dining in Spanish grandee style, the Turquoise Room offers a varied selection of items on its menu.