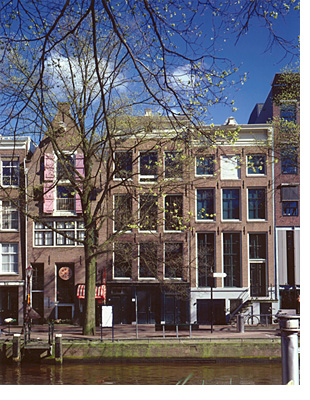 If there’s one place that you visit in Amsterdam besides the famous Red Light District, let it be the Anne Frank House. Chances are that you’ve heard of the young girl who was sequestered with her family in the hidden annex of an Amsterdam building during World War Two. With the publication of The Diary of Anne Frank, her voice was released to the world long after the Nazis discovered the family’s hideaway and hauled them away.

Imprisoned in a concentration camp, she perished mere months before the end of the war, leaving as a legacy to the world, a diary of her thoughts and dreams. It is an account of human tragedy that has touched the hearts of thousands and still haunts us, fifty-seven years later.

Nothing brings Anne Frank to life more vividly than a visit to the annex where she spent two years prior to being arrested. Located at 263 Prinsengracht, it’s a tall building in central Amsterdam—one in a long row of the city’s canal houses.

Once the business office of Anne’s father, Otto, the annex became a hideout in 1942, when the Franks went into hiding with the Van Pels family and Fritz Pfeffer. 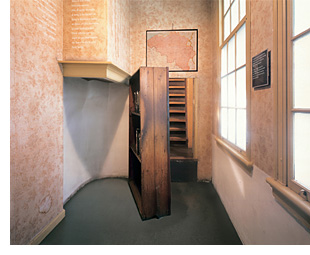 Otto constructed a doorway to the annex concealed behind a moveable bookcase, and with the assistance of his office personnel, who knew of the hiding place and supplied its eight occupants with food and news from the outside world, they survived until August 1944. That month their hideout was betrayed and the family members deported. The only one to survive the war would be Otto.

Now a museum, the rooms have been barely touched since the Franks resided there, though after their eviction, the Nazis threw out the furniture that once filled this small space.

I wait in line for 45 minutes just to get in, for the annex’s tiny rooms and cramped passageways can accommodate only a handful of visitors at a time. Around me is the buzz of many languages as tourists from all over the world queue patiently in an attempt to understand Anne’s tragic story in a more tangible way 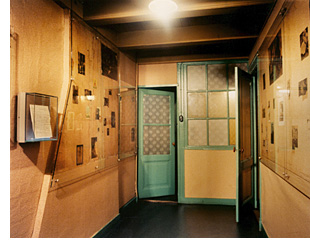 In 2005, 965,000 visitors tiptoed silently through the Frank hideout. Yet despite the number of people who make their way through this space, the annex feels haunted; it’s atmosphere raises gooseflesh and reduces your voice to a whisper. We enter through the secret door guarded by a swinging bookshelf, a heavy piece of furniture—one you’d never think would slip easily aside.

Here, at a small desk in a room covered with postcards of once-famous personalities, Anne sat sketching her hopes and feelings in the pages of her diary. Despite her circumstances, she maintained an optimism that was truly amazing. Confined, frustrated and ever cautious of being discovered, she dreamed about her future unaware that she would never get to live it.

Reading her diary, you soon realize that Anne was a young girl with high morals and social conscience. The preservation of the Anne Frank House exists to propagate her ideals not just in relation to the times in which she lived, but also in terms of their significance today.

In a time when neo-Nazism, racism and xenophobia are rife, the organization’s goal focuses on “the realization of a pluralistic democratic society in which every human being is seen as a unique individual with equal rights under the law.”

In the front section of the house, which Anne’s father Otto used as his office before the war, the cabinets display parts of her original diary, photographs, salvaged documents and a few odd possessions of the eight people who once hid here.

Anne’s story is told all too evocatively, with excerpts from her diary, videos and personal documents. In the multimedia area, visitors can go on a “virtual journey” through the Anne Frank House, obtaining background information about the people in hiding and about World War Two.

There’s hardly a dry eye as I get ready to leave, and it could be because in the confines of this building on Prinsengracht, Anne Frank is still very much alive.

You feel her watching you as you move slowly through the house, and you know that this is one museum you will never forget.

Photos courtesy of Allard Bovenberg, Anne Frank Houses:
1: Exterior of the Anne Frank House.
2: The swinging bookcase, which hid the entrance to the annex.
3: Anne Frank’s room where she wrote her diary surrounded by pictures of then famous people.

For more information:
The Anne Frank House is located next to the Westerkerk, one of the city’s large historical churches. It’s a 20-minute walk from Centraal Station, Amsterdam’s main train station, or take a bus or tram to Westermarkt, a block from the museum’s entrance.
For further information click on http://www.annefrank.org or call 31 (0)20 5567100