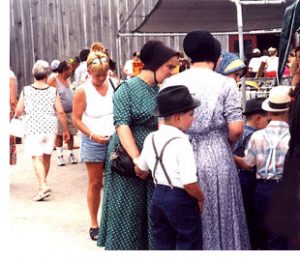 At nine o’clock on a perfect summer morning the Village of St. Jacobs is tranquil. From where I stand looking down King Street, the only vehicle on the road is a horse-drawn black buggy driven by an Old Order Mennonite farmer wearing a wide-brimmed black hat.

A few minutes later another four-wheeled open carriage crests a rise in the road, this time with a young woman at the reins. She, and her companion both wear long-sleeved print dresses, aprons and bonnets, while the small boy sitting between them is in white shirtsleeves and suspenders. They look as scrubbed and wholesome as characters in a Norman Rockwell painting.

The clip-clop of horses’ hooves and clatter of carriage wheels, the scent of fresh baked bread wafting out from the village bakery, and the heritage buildings flanking the street, are all reminiscent of a long gone era of unhurried simplicity.

At first glance it seems as though nothing has changed since the town’s Old Order Mennonite settlers first arrived here in Connestoga wagons in the early 1800s. The notion of time standing still is, of course, illusory, but in St. Jacobs this is a gentle deception. Many of the old buildings still exist, but in a new guise – that of upscale boutiques, craft shops and art galleries.

While most visitors are drawn to St. Jacobs for its antiques, fine linen and furniture shops, many are also intrigued by its history.

Two centuries ago the Village was known as Jakobstettel or “Jacobs settlement” after Jacob C. Snyder, the Mennonite farmer who pioneered the early development of the town. Although “Jakobstettel” was anglicized to “St Jacobs” with the opening of the first post office in 1852, old Mennonite family names still permeate the Village. 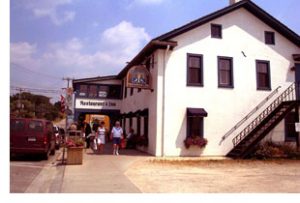 Eby Street is a well-traveled thoroughfare, the William W. Snyder House, built in 1898—now re-named Jakobstettel Guest House—is an elegant Queen Anne style mansion, while the Steiner House built around 1857, is a four-square Georgian building fronting on King Street. (In the course of recent renovations, a child’s shoe was discovered buried in the wall – a good luck charm, according to an old German belief.)

The Steiner House is now a boutique called “Ruffled Elegance” and an Old Order Mennonite needlewoman sometimes drops by to demonstrate the art of quilting in an upstairs room.

Most of us are familiar with the Home Hardware signboard in our local shopping malls, but few realize that St. Jacobs is where it all started.

Walter J. Hachborn went into partnership with Henry Sittler back in 1948 to develop the chain of independently run stores that now stretch across Canada. Hachborn still lives in the neighborhood and is often seen in the original retail outlet on King Street, or at the Home Hardware headquarters a few blocks south of the town core.

The name Sittler is, of course, well known to hockey fans, and St Jacobs was where the former Toronto Maple Leaf captain spent his boyhood years. Darryl’s grandfather, Jake, worked at St. Jacobs Creamery in the days when milkmen delivered cream and milk door to door in horse and wagon teams.

The local joke is that Darryl’s unerring slap-shot technique was developed in the course of helping his grandfather heave manure out of stables!

A block over from the Home Hardware store, I pause at the corner of King Street and Front Street, where another landmark of St Jacobs’ Mennonite heritage rises against the skyline: the silos of the Pioneer Roller Flouring Mill. 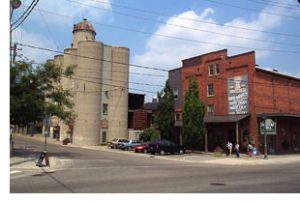 Established by Elias W.B Snider in 1870, this was the first mill in Canada to export its prime quality flour to Glasgow, Liverpool and Belfast. Today the silos have been converted into an unusual retail outlet for the Village’s gifted craftspeople, and as a showcase for exquisite collections of crystal ornaments, brass lamps, jewelry, leatherwork, quilts, pottery and glass-blown objects d’art.

Lunch beckons and I drop in to Benjamin’s Restaurant & Inn on King Street, kitty-corner from the Silos. Built in 1852 by Joseph Eby as a coach-stop between Kitchner (then known as Berlin) and Elmira, it was flanked by a horse and carriage livery service. A reminder of that long vanished era is a sidewalk trough and pump once used for watering horses.

Even though the legacy of Mennonite pioneers lingers on in St. Jacobs’ historical landmarks, few members of the Old Order live in the Village today. Primarily a farming community, their homesteads are dotted across the rural areas surrounding St. Jacobs. As I emerge onto King Street after lunch, it is now lined with cars, pick-up trucks and SUVs, and its sidewalks are thronged with shoppers.

I am back in the commercial world of the 21st century, and in its bright glare, no horse drawn buggies rumble over the rise in the road.

The Village of St. Jacobs lies approximately 15 kilometers north of Waterloo in the Kitchener-Waterloo area of Southern Ontario.

The Visitor Centre at St. Jacobs houses a Mennonite Interpretation Centre that provides fascinating insights into the history, beliefs and lifestyles of the Mennonite people, via a multimedia presentation encompassing photos, narratives, lighted displays and a film documentary

For general information on the Village of St. Jacobs and surroundings, go to http://www.stjacobs.com/