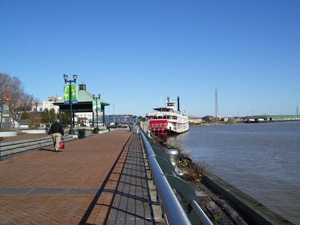 Signs of Katrina are everywhere; water lines on the concrete embankments of the freeway during the taxi ride from airport to hotel; stories of whole neighborhoods abandoned and destroyed; or the haunted look in the eyes of the waitress who tells of how she evacuated to survive the storm but came home to a ruined life with no home, no car, no job and ruined credit. Katrina battered the proud city, leaving it beaten, but not defeated.

The older parts of the city remain, for all appearances almost untouched by the storm of storms.

I had grown to love the city when I lived there briefly years ago while attending a Navy school. From the first moment I watched the news of the beating New Orleans received at the hands of Katrina, I felt fear and a grief.

Sadly, it was not only for the people who suffered but also for me. The comfort of the existence of New Orleans — a city unique in history and color – was part of what made my world whole. The thought that it might never truly be again upset my universe.

When we decided to take a vacation, New Orleans was at the top of my list.

Yes, we wanted to do our part to support the economy of a recovering city, but my motivations were not entirely altruistic. I needed to see it. I needed to know that the soul of the city I loved still survived. 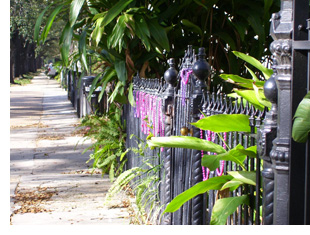 My fears began to subside, as the taxi entered the French Quarter. It seemed almost untouched from the days, years ago, when I would ride the ferry across the Mississippi and spend a day or evening walking the streets, eating amazing food, and listening to the magic of native New Orleans jazz.

As we checked into the Maison Dupuy Hotel, we benefited from the economic impact of Katrina on the local economy. Post-Katrina New Orleans needed to fill lodging. We accessed an Internet special that enabled us to book a luxury hotel on a mid-range budget.

Despite the comfort and beauty of our hotel, I could not wait to hit the streets … to walk down Toulouse Street to the river or to detour down Bourbon Street to hear if jazz still echoed throughout the area at any time of the day or night.

It was all there, almost exactly as I remembered with one very noticeable exception … the crowds.

During our stay we never had a problem getting a table at a restaurant or sat in an over-crowed trolley or bumped into inebriated tourists walking down rows of jazz clubs and restaurants.

I will admit to a mild guilt about the fact that the city’s misfortune enhanced my enjoyment of a place I had long viewed as one of the finest cities in the world.

The guilt was mild. My relief and pleasure was intense.

The soul of New Orleans survives.

Café Du Monde still serves coffee and beignets within watching distance of the Mississippi River. Street musicians still play beside the river walk, their instrument cases awaiting applause in the form of bills and coins dropped by appreciative listeners.

As I had done so many times before, I studiously ignored any thoughts of the calorie and fat levels in the sweet pastry, knowing that some of life’s pleasures simply must be enjoyed in the moment. The benefit to my spirit as I enjoyed the tastes, the smells and the sounds outweighed any short-term detriments to my physical self. 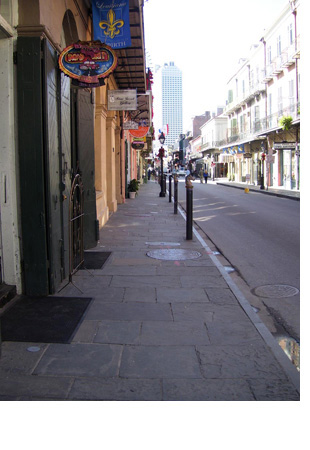 Jackson Square remained much as I remembered it. We walked the square and stopped to visit with the hack drivers who provided horse-drawn guided tours of the Quarter until we selected the one who would be our guide.

The mule that drew our wagon was at home in a city where houses and businesses still sport the metal rings that served as hitching posts for the mules and horses that were once the primary source of transportation.

Our tour confirmed that the heart of the city remains, largely due to people, like our driver and guide, who loved the city enough to ride out the storm or to return when the city was re-opened.

Yes, the old and historic buildings remain, but it is these hardy individuals who provide the primary reason that the soul of New Orleans survives.

People like the cab driver who lived out of his cab for five months while he awaited FEMA assistance so he could have a home and return his family. People like the musicians who turned carpenters to help rebuild the city that was home to the music they love.

People like the retired policeman who now struggles to build facilities for the youth who now, more than ever, need mentors and recreational options to keep them off the streets and out of trouble.

In a small way, I hope that we were a part of that contingent of courageous people striving to revive the city.

Newscasts depicted New Orleans as a devastated place, but we chose to spend our vacation dollars there. It was a small contribution, but it was a contribution, one that I would recommend for anyone.

Who would not choose to invest in a fantastic trip and help revive a historic city?

Photos by Kayt C. Peck:
1: The Riverwalk that parallels the Mississippi River.
2: Mardi Gras beads hang from one of the many wrought iron fences in the city.
3: Daytime view of the Old Quarter.